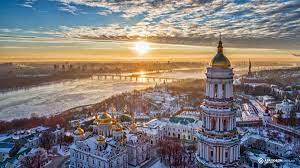 Waking up yesterday morning with the news of Russia invading Ukraine, I felt so much sadness and empathy for the Ukrainian people. My heart and prayers go out to them. ❤️🙏

As a first generation American of Polish parents who came over after World War II, this hits close to home. My Dad was a little boy when the German Army burned his village to the ground and they were taken to work camps in Austria; where his little brother died from DDT that was used to spray the camps for lice. He was only a year and a half and was put down for a nap and tragically never woke up. My Mom, as a child, remembers hiding under a blanket only to have it pulled off her by soldiers with guns drawn. Apparently the women would run out into the fields to hide so they wouldn’t be raped; leaving the children behind as they thought the soldiers wouldn’t hurt them.

And the invasion of Ukraine is happening the same week that the U.S. is having its’ Pluto Return (which only happens every 248 years or so and is the first one for the United States.) This is when Pluto is in the exact position in the sky that it was in when this country was “born” which is with the signing of the Declaration of Independence. And although the exact date of the transit just happened this past Tuesday (2-22-2022) we’ve been feeling this transit for years and will continue to feel it; with the main themes of Pluto being Death/Rebirth and Transformation. Death of old structures and what hasn’t been working with the rebirth of what’s in alignment for the Soul of America – and the World; as the U.S. Pluto Return affects the whole planet.

And although I see the bigger picture and I know at my very core that these things are taking place for the transformation of this planet (and what I feel you and I signed up for!) . . . I still feel a bit helpless at times as I witness events taking place around the world; and can sometimes feel overwhelmed with emotions of sadness, anger, apathy and hopelessness. (Sound familiar?)

BUT THAT’S O.K.! There’s NOTHING wrong with emotions or what we are feeling in response to our own or other people’s suffering. For me these days, the journey is how to be with the feelings that are coming up and hold loving space for them; instead of pushing them away, and contributing to my own and to the collective shadow.* (*Disowned parts of ourselves that we push away and can act out in unconscious ways if not fully integrated.)

SO HOW DO WE BE WITH THESE EMOTIONS AND LEARN TO RIDE THE WAVES OF BEING HUMAN?

I think first and foremost, we REALLY need to take good care of ourselves – and our nervous systems – during these times. I think of a 911 operator who answers calls and remains calm and able to respond to each person in front of her without getting caught up in the chaotic energy. When we can be more grounded in our body, it’s much easier to respond (and not react) to whomever or whatever is in front of us. (And remember sometimes that person in front of you is YOU.)

“You yourself, as much as anybody in the entire universe deserve your love and affection.” – Attributed to the Buddha

Being grounded is just another way of saying “being present in this body, in this moment, with whatever is happening” – even if we don’t like it! And holding space for all that is coming up individually . . . and collectively. It’s not easy! And an important note here . . . it helps to breathe!

These days, I’m finding that SELF CARE is no longer a luxury! And I’m not only talking about eating good food, being in nature, and all the other things we’ve learned to take better care of ourselves. I’m talking about being with the parts in ourselves that we’ve exiled and turned into “refugee children.” Any part of ourself or feeling we don’t like.

And that’s why I find Dancing so healing! I can create a space where I can welcome whatever “visitor” wants to come (like Rumi talks about in the “Guest House”) and be with whatever is coming up and allow it to “dance” through me – instead of it becoming stuck in the tissues of my body. I agree that “the issues are in the tissues.”

So I invite you to join me this Sunday, as we hold space for whatever “guest” might show up . . . and welcome them as we would a dear friend . . . as we also offer up our “Dancing Prayers” for the good of all beings; especially for the people of Ukraine and the people of Russia; as we hold them in our hearts and bathe them in the light of our love.

* This Week’s Playlist will include some Ukrainian songs as my small way of honoring and standing with the Ukrainian people.

I know Ukraine is far away and may not affect our everyday life, but I can almost guarantee that we are all feeling it on some level – whether we watch the news or not. As sensitive beings, we feel the energy of those around us and what’s going on in our world. So something else I find helpful when I feel helpless about a situation, is to light one of those 7 Day candles and offer prayers for the highest good of all concerned in that particular situation; and then surrender it to the Universe; knowing if there’s some action I need to take, I will be shown. (Just my 2 cents and $1 for the candle at the Dollar Store. 😊)

Thank you for BE-ing here on the planet at this time! Your life matters! You are important! Just by living your true essence and cultivating a little more love and kindness for yourself and for those you meet along the way, you are changing the world!

The Zoom link to join us on Sunday is in the group email I’ve sent.

“There are many paths to God. I have chosen that of music and dancing!” – Rumi

This dance is by donation. Any amount is appreciated.